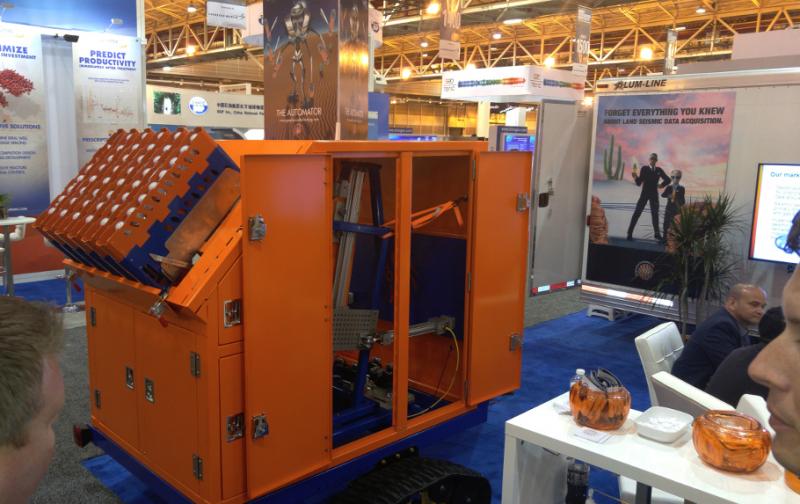 It had to happen.

With all of the myriad technological breakthroughs in seismic acquisition technology, one of the anachronisms has been the laying out of cables or nodes on land. It is a laborious process that requires considerable manpower. And with the constant demand for increased channel count, it has become a stumbling block to productivity.

“People are talking about 1 million channels per crew, and to have 1 million channels you have to be able to pick up and deploy 50,000 per day,” said Richard Degner, president and CEO of Geophysical Technology Inc. (GTI). “You just can’t do that by hand efficiently or cost-effectively.”

Enter the Automator. It sounds like something out of an Arnold Schwarzenegger movie, but it’s actually a simple but elegant solution to this problem. Designed by GTI and built by Sparx Engineering, the Automator plants nodal geophones robotically and eliminates the need for large land crews.

GTI is Degner’s brainchild. He began forming the company after leaving the helm of Global Geophysical. The initial concept was to find a new type of nodal geophone for land and transition-zone acquisition.

“We found a design that we really liked, a concept with a form factor that lent itself to efficient operation,” Degner said. “Within a year we purchased the underlying intellectual property behind it.

“We’ve spent the last two years developing that, testing the form factor and developing automation around it because we believe that nodal seismic recording systems need to lend themselves to automation to be highly effective and efficient.”

The move to nodes already has enabled efficiencies, Degner said, doubling crew productivity while reducing costs by 10% to 15%. Adding the Automator will further drive this trend.

The device is fitted with six cartridges, each of which holds eight nodes. A self-leveling derrick within the machine adjusts for terrain to plant the nodes at true vertical. The unique design of the nodes ensures good coupling, which is important for reducing noise.

The nodes are fitted with a variety of positioning systems. GNSS and GPS provide location and accurate timing. They also contain a Bluetooth device to communicate with handheld Android tablets that then pass status and parameters by Wi-Fi to high-frequency radios or cellphones nearby to update their performance status into a master database.

While the Automator can’t work everywhere, it can operate on a 16-degree grade, and Degner said it could handle 60% to 70% of the terrain in a region like the Marcellus Shale. The nodes can also be placed manually in more difficult terrain.

“I think automation is something that really is now enabled, especially with the form factor that we’ve created. And there’s interest in robotics in general.

“Robotics to replace or enhance a doodlebugger was an eventuality that was certain to occur.”