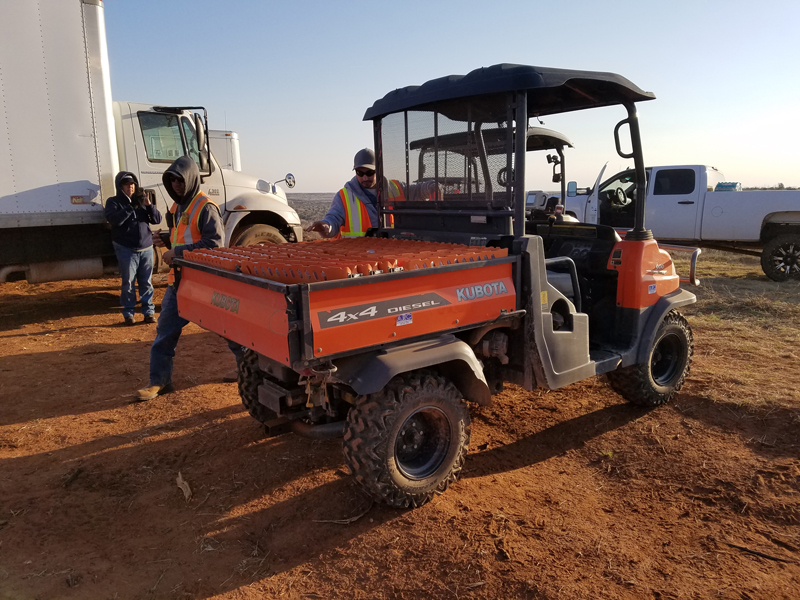 A nodal recording unit with a unique form factor leads to improvement in coupling and vector fidelity on land seismic surveys.

New nodal recording systems weigh only 2 lb, including geophone and battery, and can record continuously for weeks. To seismic operators, this evolution has manifested a new generation of nodal recorders that provide huge flexibility in the way 3-D surveys are designed, allowing operators to greatly increase seismic trace density while staying within a customer’s budget. In addition,new nodal recording systems also have led to a marked improvement in receiver coupling and vector fidelity.

New nodes are much smaller than older recording systems, and they do not have cables attached to them. Therefore, the entire recording unit can be placed into the earth, not just the geophone sensor or accelerometer. GTI’s NuSeis nodal recording unit, for example, is designed to be pushed into a 2-in. diameter hole, which is created using a slide hammer. This is a very similar process to press-fitting a shaft into a bearing such as on a truck or an automobile axle, and it results in an exceptionally tight fit between the sensor and the earth, which is called earth grip coupling. Whereas a conventional geophone in a land case with a 3-in. spike might have a contact area of only a few square inches with the soil, the NuSeis nodes will routinely have as much as 50 sq in. of contact area.

The nodes also can reach denser, more consolidated material. GTI recently repeated experiments on receiver coupling originally done in the early 1980s showing that loose garden topsoil can be nonlinear at frequencies as low as 100 Hz. Getting beneath the loosest soil and into denser material can lead to improvements in high-frequency response and vector fidelity in general. Some seismic contractors have a long history of using marshcase geophones rather than land-case geophones for this exact reason. The new recorder approximates the size and shape of a marsh-case geophone.

In addition, the small size of the nodal recording unit and lack of any cable connections allows the entire unit to be quickly and efficiently placed below ground level. This placement results in a decrease in the pickup of background noise by eliminating any exposed surface vertical profile of the recording unit to wind and other airborne acoustical noises. Even the mechanical transfer of rain noise is highly attenuated when the nodal recorder is underground. And when a unit is planted with the top dome above ground, the vertical profile is far more aerodynamic than other recording systems because of its sharp perpendicular edges.

In side-by-side field tests over the last two years, several examples have been collected. Figure 1 illustrates marked improvement in high-frequency response from a walk-away comparison test conducted near Angleton, Texas, using an accelerated weight drop as the seismic source. The figure shows bandpass filter panels for the data recorded with the NuSeis unit versus data recorded with another nodal recording system using an external single geophone with a 3-in. spike.

Above 70 Hz, the geophone data contain very little reflected energy, whereas the NuSeis data have clear reflections down to at least 700 ms. Spectral analysis quantifies the difference in signal level to be on the order of 6 dB to 8 dB greater for the NuSeis data in this time interval.

On this same comparison test, the first breaks were also visibly sharper and stronger. As is generally true, the first breaks have the highest frequency content of any events on these seismic records. In this case, the bandwidth of the signal on the NuSeis data goes all the way up to 125 Hz, with a maximum difference of 16 dB at 85 Hz relative to the geophone data (Figure 2). Improving first-break sharpness can make it easier to pick the first arrival time and minimize errors in the computation of refraction or other static solutions.

Signal-to-noise ratio is one of the key metrics in evaluating field seismic data. This metric can be improved by either increasing the signal levels or decreasing the noise levels. Figure 3 shows that the aerodynamic profile of these nodes has decreased the background wind noise level substantially in the high-frequency portion of the spectrum versus geophone data. Specifically, the figure shows Vibroseis-correlated records with a high-pass filter applied with the corner points at 80 Hz and 100 Hz, respectively. The banding caused by noisy stations in high-grass areas of a hay field can be seen on the geophone data but not on GTI’s data.

Vector fidelity has been an important topic in seismic acquisition research for almost 40 years. While the ability to image reservoirs deep within the earth is dependent on powerful processing algorithms, those algorithms need accurate measurements from the earth’s surface to provide optimal results. The old phrase “garbage in, garbage out” is never truer than in seismic acquisition and processing. The new generation of compact recording nodes should improve vector fidelity and thereby start the long seismic imaging workflow with the best input possible.

FIGURE 2. This side-by-side comparison of NuSeis versus conventional geophone data shows the fixed-gain-display first breaks and corresponding spectral analysis, which shows up to 16 dB higher amplitudes at 85 Hz. (Source: GTI)